When taking the time to plan and design a headstone for a family member, deciding on the right symbols can be one way of truly personalizing the memorial.  Over the years people have used a wide range of symbols to depict all kinds of things.  Here is an A-Z breakdown of some of the most common symbols found on headstones and their meanings, to help you choose the right ones.

A symbol of hope and strength in eternal life.  In the past it has been used by Christians as a disguised cross to mean the anchoring influence of Christ, stereo-typically anchors are often seen on graves of sailors.

Symbolising the messengers between god and humans; divine communication and spiritual connection.  The left hand often holds a scroll and the right hand a finger to heaven.

Sometimes used to symbolise peace.  A bird in flight or simply it’s wings can be used to represent a winged soul.

Often used to symbolize a journey, although can also stand for safety and refuge.

Can be used to depict prayer, scholarship, evangelists or someone who was a writer or bookseller.

Can be used to represent rebirth, resurrection and the soul.  Butterflies are popular with children’s headstones.

Can be used to mean the eternal soul, spirit or life.

A longstanding symbol of eternity, can sometimes be found on christian headstones alongside a cross.

This symbol is traditionally used to mean the unity of man and woman such as husband and wife.  It can also represent their parting and goodbye.

The symbol of Christ and his redemption of sin, as well as an individuals faith in God.

The daffodil can signify rebirth and new life as well as love and hope.

A symbol of love and peace, may be considered to have christian origins.  The dove also represents purity and resurrection.

A symbol of strength and courage, sometimes used to depict the messenger of the Gods.  In Christianity the eagle can be a symbol of resurrection.  The eagle is synonymous with America.

Can be a Christian symbol to depict plentiful bounty.

Synonymous with headstones of US veterans.

In ancient Greece grapes were seen as a symbol of fertility and prosperity.

A symbol of love, life and eternity.

A symbol of time ending on Earth, or conversely rebirth and new beginnings when turned over.  A winged hourglass is sometimes used to depict how fleeting the time of humans on Earth is.

Can be used on the grave of a child to represent innocence and/or used as religious importance as the sacrificial lamb of God.

A beacon depicting a safe-haven.

A symbol of innocence and pureness, popular in Victorian times.

A symbol of creation and rebirth.

A symbol of undying love.

In ancient Greece the owl was the symbol of the goddess Athena to depict her wisdom, this association with owls still holds true in Western culture today.  Owls can also also be a watchfulness.

Can be a symbol of self-sacrifice and humility.

A common symbol of remembrance.  In parts of Europe and Australia rosemary was often sprinkled over graves during war commemorations.

Commonly used as a symbol of life or the fragility of it.  Common trees used on headstones include oaks for steadfastness, palms for peace and willows for mourning.

Often used as a Christian symbol to represent the body of Christ.

Buzzi Memorials have been perfecting the art of monument and headstone craft and care for over 30 years. 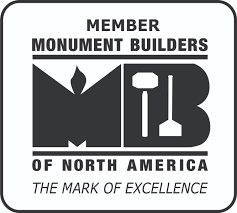